Welcome to Tom Hiddleston Online a fansite for the actor mostly know for his role in Marvel's Cinematic Universe Loki. You might also know him for his role in theater plays such as Coriolanus and Betrayal, and other films and series such as The Night Manager, War Horse, Kong: Skull Island, Crimson Peak, Only Lovers Left Alive and many more. Tom Hiddleston will be seen next on Disney's series Loki and Apple TV The Essex Serpent. I hope you enjoy you stay and have fun! Annie
Published on In
Articles Avengers: Infinity War Films Productions Photo Gallery Thor: Ragnarok

While at Comic Con, the cast of Marvel’s Thor: Ragnarok and Black Panther took part in a Marvel family photoshoot. Below is a snippet of the accompanying article:

Backstage at Comic-Con, THR captured Cate Blanchett, Michael B. Jordan, Mark Ruffalo and more in the first-ever star-studded portrait of the next phase of the Marvel Cinematic Universe.

About 30 minutes before the stars of Disney’s and Marvel’s Black Panther and Thor: Ragnarok took to the Hall H stage at Comic-Con on Saturday, the worlds of Asgard and Wakanda collided backstage for the first-ever Marvel family photo of the two casts.

Nineteen members of the Marvel universe — led by Marvel Studios president Kevin Feige — posed for The Hollywood Reporter’s exclusive portrait backstage just moments before the studio’s presentation. From the moment they arrived, the room was full of laughter and hugs, as many of the actors were reuniting with their casts for the first time in months.

The full article can be read here.

I have added two shots of the photoshoot to the gallery, via the link below. 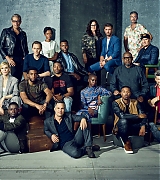 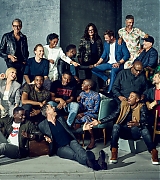 Tom Set To Appear As Hamlet In New Theatre Production