Welcome to Tom Hiddleston Online a fansite for the actor mostly know for his role in Marvel's Cinematic Universe Loki. You might also know him for his role in theater plays such as Coriolanus and Betrayal, and other films and series such as The Night Manager, War Horse, Kong: Skull Island, Crimson Peak, Only Lovers Left Alive and many more. Tom Hiddleston will be seen next on Disney's series Loki and Apple TV The Essex Serpent. I hope you enjoy you stay and have fun! Annie
Published on In
Coriolanus

Tom Hiddleston has gone from the theater to “Thor” and back again. The British actor has returned to his classical stage roots with an acclaimed starring role in William Shakespeare’s “Coriolanus.”

“Shakespeare led me to superheroes,” Hiddleston told Wednesday’s edition of the Evening Standard newspaper, as critics raved about his performance in the Bard’s blood-soaked tragedy at London’s Donmar Warehouse.

Hiddleston made a splash at the 250-seat venue in a 2008 production of “Othello” starring Chiwetel Ejiofor. Director Kenneth Branagh later cast him in the superhero film “Thor,” and he has gone on to star as the Norse hero’s evil brother Loki in three Marvel Studios movies. He also recently played a bohemian vampire alongside Tilda Swinton in Jim Jarmusch’s “Only Lovers Left Alive.” He returns to the stage as the anti-hero of Shakespeare’s final tragedy. In some ways the character is the dark flipside of warrior-king Henry V — a role Hiddleston played in the BBC’s Shakespearean series “The Hollow Crown.”

Caius Martius Coriolanus is an ancient Roman warrior who finds his skills and temperament, so vital in battle, tragically unsuited to politics. The Independent newspaper praised Hiddleston’s “blazing stellar power,” while the Daily Telegraph found the 32-year-old actor “compelling and persuasive” as “a lean, mean killing machine.”

A play drenched in treachery and bloodshed is directed with pace, clarity and depth — and even, against the odds, occasional laughs — by Donmar artistic director Josie Rourke. The stripped-down, modern-dress production draws out the play’s sophisticated, cynical and ever-relevant view of politics. Coriolanus’ contempt for the common people — “the mutable, rank-scented many” — is his undoing. But the masses are shown to be fickle, and manipulated by the slippery tribunes chosen to represent them.

The cast members, all displaying a deft touch and subtle way with Shakespeare’s lines, include Deborah Findlay as Coriolanus’ fearsome mother Volumnia, Hadley Fraser as his enemy-turned-ally Aufidius, and Mark Gatiss as his patrician mentor Menenius.

Hiddleston’s physicality is sure to please his many fans, some of whom lined up eagerly for autographs outside Tuesday’s opening-night performance. He engages in dangerous-looking swordplay, becomes drenched in blood, strips to the waist and has a memorable onstage shower, blood and water running off his body in torrents.

In the Times of London, Dominic Cavendish noted that the scene “will please the MTV viewers who have just voted Hiddleston the sexiest man in the world.”

The play, which runs in London to Feb. 8, will be broadcast to 300 movie theaters around the world on Jan. 30. 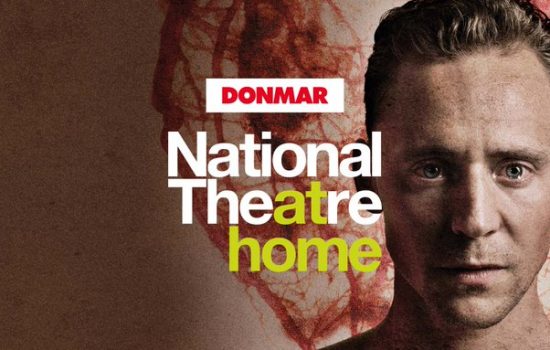 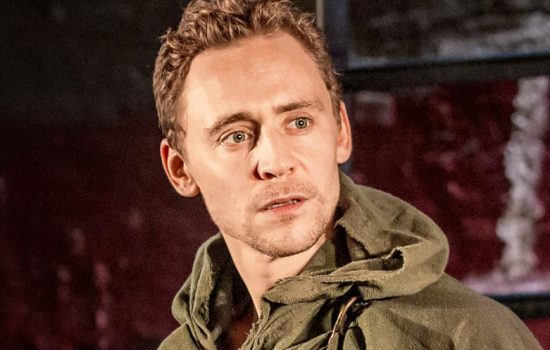 Tom Hiddleston on Coriolanus: ‘There was nowhere to hide – that’s exciting’